Enemy No 1 (give or take the blackbirds) 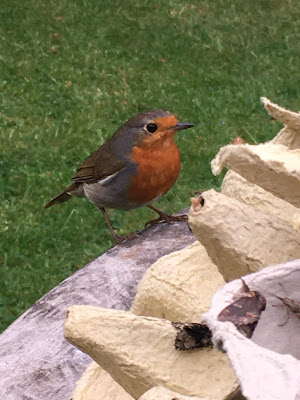 The convention is to say: "I'm pleased to introduce you to my friend So-and-so", but I can't in all sincerity do that to my acquaintance above. I admire his cheek and, alas, his ingenuity, but he and a couple of blackbirds in our garden are a menace to my slumbering moths.

There are plenty of these about still; here's a selection below, and I want things to stay that way. I appreciate that it's the fledging season for birds with lots of hungry mouths to fill. But I play, and am winning, a determined game of hide-and-fail-to-seek, by secreting the moths, eggboxes or sometimes the whole inverted trap under bushes or in clumps of nettles and long grass.

I know that in some ways this is a meaningless if humane gesture, as the UK's birds eat incredible numbers of insects every day. Look, for example, at the mini-biography of a Blue Tit on the website of the British Trust for Ornithology. An average nest of 10 baby tits eats around 1000 caterpillars a day at this time of the year.

Here are some of their potential victims, safe at least for now in my trap. Although beautiful and graceful, the Common Wainscot is around every day in large numbers, so it is good to have a change with this boldly marked and less frequent relative, the Shoulder-stripe Wainscot. 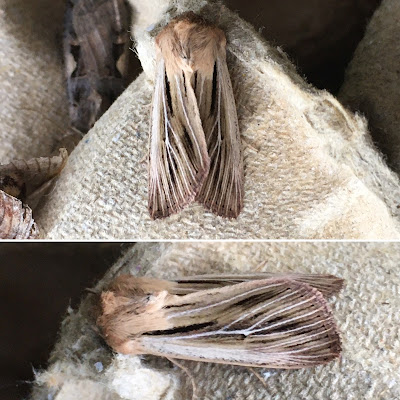 And here's another newcomer for the year, a lovely and very newly-hatched Campion with its beautiful tracery of mauve: 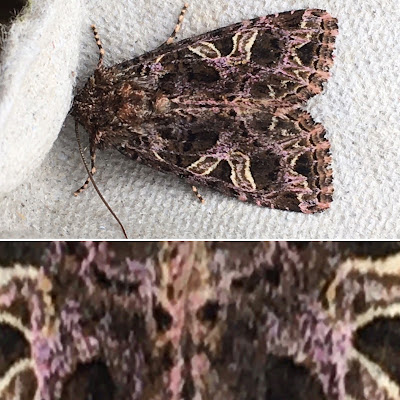 A third debut: a Light Emerald, followed by a male Pale Tussock in a slightly different resting position from the usual 'cat stretch', and two oddly-shaped moths: the rakish Angle Shades (one of the commonest moths found by friends and family and photographed for me to to ID - the optimists!) and a Pale Prominent, weird in every way down to its snake's tongue tail. 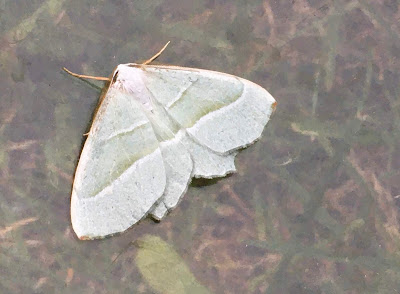 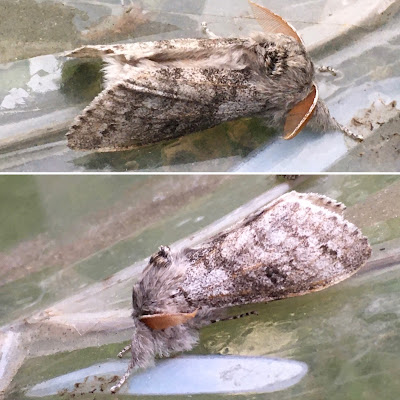 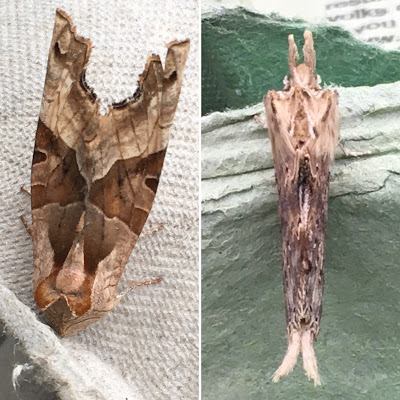 I cannot resist the Elephant Hawk moths and here are three more; a beautiful example of the Small species and a couple of adjacent ordinary Elephants, like the Pink Arrows, were such an RAF team to exist. 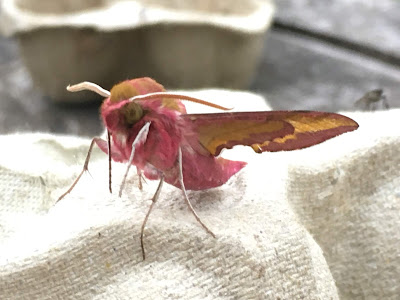 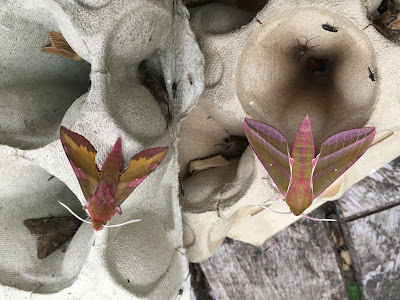 Next we have a micro which I hope to ID shortly, with the help of that pronounced white dot on its head. The next one has me puzzled too, but I hope to sort it out by the end of the day. Update: I have tracked down the micro and it's Phtheochroa rugosana (imagine introducing someone with at name). And after much debate and help - see Comments and my Upper Thames Moths blog post here - it remains tantalising not quite definite; either a Treble-bar or, more probably, a Lesser Treble-bar. Many thanks to all who helped for your time and expertise. 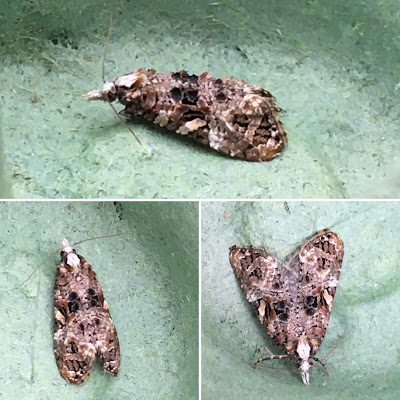 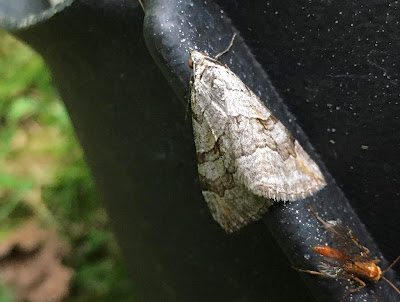 And lastly, some of my other visitors whose pictures I am busily despatching to iRecord. I'm pretty sure that the one in the middle is a Hawthorn Shield Bug. Update:  I am wrong (again).  It's a Birch Shield Bug - but the very encouraging expert Maria Justamond said: 'Very close!'  Thank you! 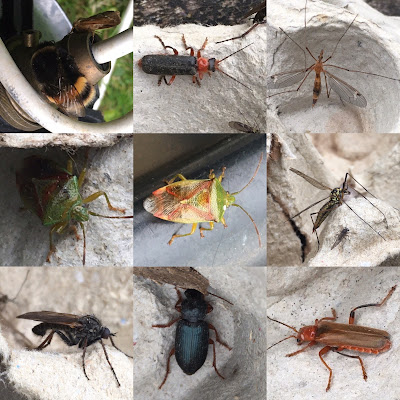 Posted by Martin Wainwright at 07:06

I think your bottom right picture on the clockwise quintette is another Minor agg. Stay safe, Edward.

Hi Edward - thanks v much; you are absolutely right, as ever. I will update. Do you have any ideas about the last moth? I wonder if it is a faded Common Marbled Carpet because of the sort-of tooth mark? all vb M

I reckon that it is a v tired Spruce Carpet in an odd resting position. Hope this helps. Stay safe, Edward.

Just seen the UTM post. I should have known or was s Treble bars, sorry. It was how worn it was that threw me, should've known that one. Sorry again. Stay safe, Edward.

Hi again - acrually I'd considered the Treble Bars but the pattern didnt look quite right from Richard Lewington's paintings. I really appreciate your time and trouble. Good mothing! All warmest M