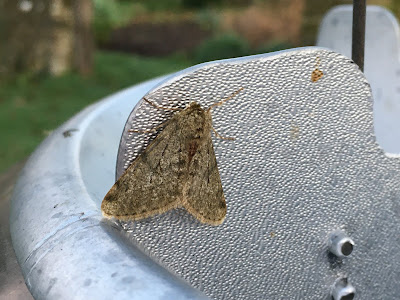 I was going to say that my second night with the moth trap this year saw the guest-list increase by 100 percent, but some warning bell sounded from 1966 when I scraped through maths O level with grade 6, the lowest which still constituted a pass. A hundred percent of nil is nil, it reminded me. So the fact that I got one moth last night was an increase of a different order. 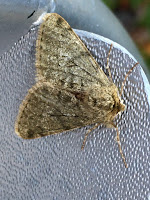 The moth is a Pale Brindled Beauty, a traditionally early flyer with a reassuring amount of fur coat to help to keep it warm. It wasn't actually in the eggboxes but perched on a section of the bulbholder which was gently warmed by the nearby light. In the hope of photographing its underwings, I gave it a little tickle with a twig and it obligingly fluttered down to the grass and revealed all. That includes - picture below - the slightly pinkish tone of its body colouring, the sign of a freshly-hatched specimen. 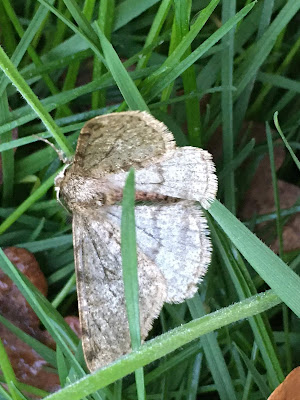 Here it is again, below, on a scrap of eggbox, showing the fine antennae which almost always mark a moth out as male, because of their role in detecting the pheremones given off by females. Actually, you don't need to see these to know the gender of the moth. Take a look at my final picture of the Pale Brindled Beauty's poor old flightless female, who is in fact an example of evolutionary success. She sits contentedly on a tree trunk, safe from the dramas of night flight, and waits for a male to arrive and do the business, before laying her eggs and starting the cycle off again. 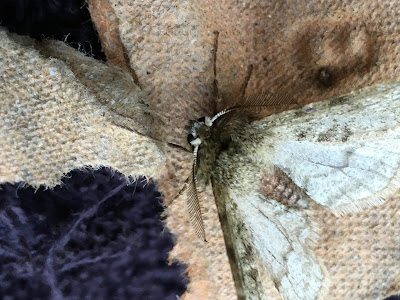 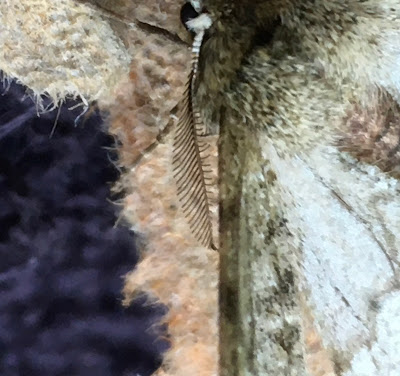 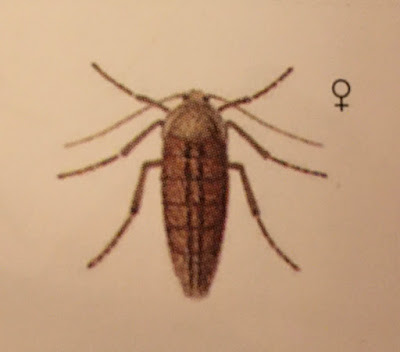 
Posted by Martin Wainwright at 22:46

Good to see you up + running Martin. I attended our first monthly catch last weekend + we managed 7 species. When I got home found white-shouldered House Moth, so 8 species for the day. Hope it's going to be a productive year!

Hi there and a very happy New Year! Keep an eye on that House Moth...

Seven species is very good. I'll put the trap out again before the end of the month but am not going to overdo things after my recent records marathon One year had 200 nights and another 74 and it was a lot easier coping with the latter

All warmest as ever and good mothing luck for 2020