Oh I do like to be beside the seaside... 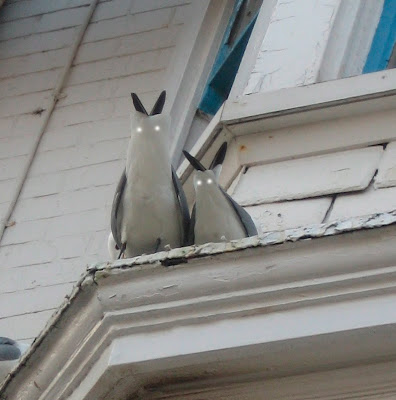 Tidddly-pom! No moths today. we had a lovely Easter break at Scarborough instead, with piping hot sunny weather and all manner of fauna, human and otherwise, gambolling by the North Sea (or German Ocean as we used to call it; a more interesting and grander name in my view). I was specially pleased to catch this pair of Black-eared Kahlos, the little central American variant on the guinea pig which is becoming a fashionable pet in London. I had no idea they had reached Yorkshire, but here are two being given a careful outing by their owner on a window ledge. 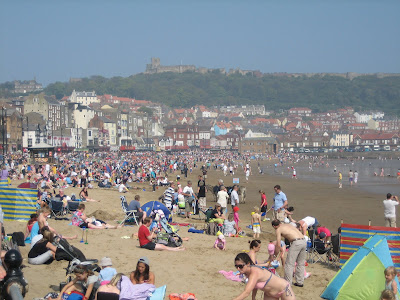 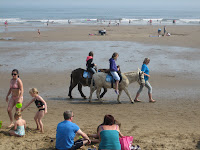 Down at the sands - wonderful sands if you're not familiar with the Queen of the Yorkshire Coast - the activity was mostly human, but it was good to see the dear old Scarborough donkeys plying too and fro. I visited the castle (up there on the horizon) for the first time in my nearly 61 years. What a confession. I've been to Scarborough hundreds of times but always felt too lazy to tramp up the hill. It's well worth it. 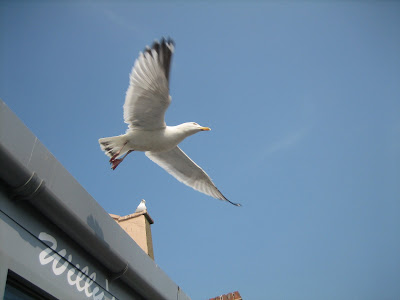 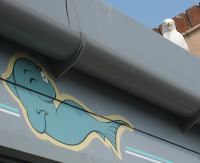 My new penchant for aerial photography kept me busy, too, as our fish-and-chip lunch was carefully watched over by seagulls, vast birds at close quarters and producers of that wonderful keening cry. Its brief use in the theme tune to Desert Island Discs is to my mind a masterstroke of production or 'library' music. 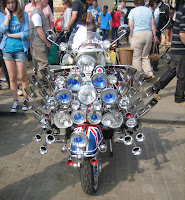 There's another gull for you below; and here's one of the fantastically decorated scooters which parade up and down the front at holiday time, ridden by ancient Mods of my generation. Overweight Leeds solicitors now constitute today's equivalent of Rockers on their big black bikes. They're all much to old to fight one another as they did in the 1960s.

No moths, though. And actually, no Black-eared Kahlos either. If you look carefully, those are gulls' bottoms. I drew in the spooky eyes... 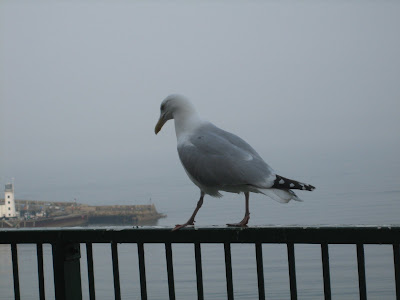 Nice post, glad to see you're making the most of this gorgeous April weather!

For those keen zoologists that pop their head into your blog from time to time, you'll be interested to know that the more common name for the Black-eared Kahlos is in fact the Kittiwake, a name derived from those cats eyes (beautifully captured by Martin) which shine down from the window ledges and keep everyone up at night!

Oh Steve thanks! Are they really Kittiwakes (as well as your excellent joke about the possible reason...)? I remember seeing the fantastic Kittiwake colony on the big Tyne bridge at Newcastle last year. Come to think of it, the racket from various seabirds on the ledges of the Grand Hotel at Scarborough was very similar to the one in Newcastle

Hope you're getting the chance to enjoy the sun too

Actually I just looked at Google Image and Ks have just the same tails.

So great identification and a great quip

I remember seeing the Kittiwakes using the window ledges when I was in Scarborough a few years ago, so I knew that they were what you had photographed. In addition, your photo shows the birds have black legs which no other gull does (their full British name is in fact the Black-legged Kittiwake, as opposed to the Red-legged Kittiwake of North America).

I am certainly enjoying the sun, and the bonus of multiple May-time moths a few weeks earlier than last year!

Lovely to see the sands at Scarborough Martin. I spent just about every summer holiday between ages zero to 13 or 14 right there, rain or shine.

A bit early for the naval battle in Peasholme Park I suppose?

Does that splendid little steam train still run out to Scalby Mills?
Riding that train in 197- , memory fails me, I had the huge pleasure of meeting Les Dawson. Sitting there on the train going, 'It IS him dad' when the great man turned round and grinned at me and said 'Hes right Dad it IS him'.

Excellent story! Oh it is a nice place, specially on a sunny bank holiday weekend like this one So many people just having a great time

and the train details are on: www.nbr.org.uk/