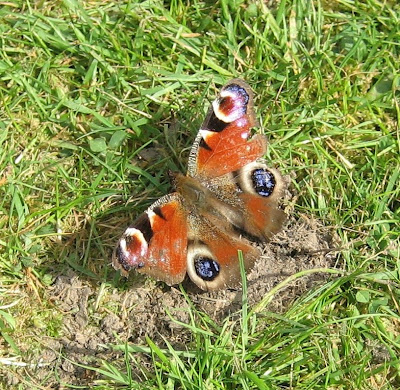 These three lovely butterflies have all emerged from a long winter sleep, tempted out by our sudden sunshine. The Peacock (above) looks a little battered by what is now a long life by butterfly standards, but the Small Tortiseshell (below) and Comma (bottom) are in pretty good trim. All three are beautifully-patterned but they are so familiar that you sometimes need to remind yourself of this, rather than take it for granted. The Peacock and Small Tortoiseshell have been familiar to me all my life, as have their black, spiky caterpillars which are one of the reasons for allowing clumps of their foodplant, stinging nettles, somewhere in your garden. 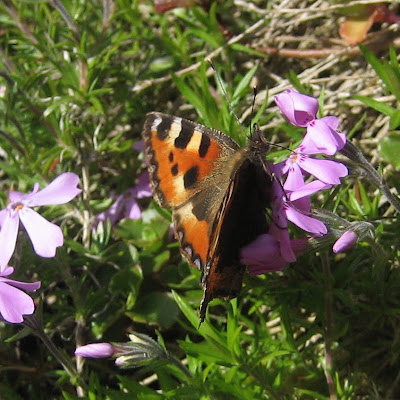 The Comma is different. It was a real rarity in Leeds once. Indeed, for most of my life. Not any more. It's numbers have expanded all over the UK and this is great because its patterning is lovely, its wing-shape intriguingly ragged (very good for camouflage) and the little white comma on its underwing a curious distinction. Its history is intriguing too, involving the discovery of a separate, lighter variety called Hutchinsoni after a vicar's wife and amateur entomologist called Emma Hutchinson who discovered its connection with day length (the lighter form flourishes as the days grow longer and the darker ones dominate after 21 June). So the Comma is doing its bit to breakthe glass ceiling too. Hooray! 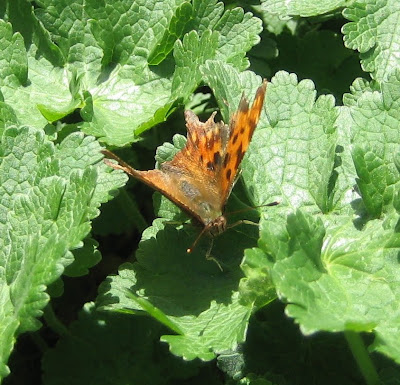 Emma Hutchinson, incidentally, was a determined character who studied the Comma intensively around her vicarage at Kimbolton, Herefordshire, and ended up knowing more about the butterfly than anyone else during her long lifetime (1802-1906). She campaigned against the burning of hop plants after harvest which almost wiped out the Comma in Kent and robustly argued against the doom-mongers of the day who claimed (what's new?) that the species was in decline. In a letter to The Entomologist magazine in 1881, she wrote:

"I am an old entomologist and have lived in this county and noted the habits of the Comma
for fifty years; and I can safely say that I never remember this species so common in any autumn as the present one, except in the year 1875, when every blackberry bush was covered with specimens of this lovely and distinct species until late in the autumn.
"I have for many years bribed those over whom I have no control in this parish to collect for me every larvae and pupa they can find, and by this means I have preserved many thousands of this lovely butterfly.” She added that she “had sent hundreds of larvae to and pupae for liberation in Surrey and elsewhere, in an attempt to reintroduce the species”

What a lot of history! Many thanks for it to the online magazine of West Midlands Butterfly Conservation. What's it called? The Comma.
Posted by MartinWainwright at 07:33

Things are kicking off with a vengence here too now. Its been a bit colder than usual this spring until the last week. But it was in the mid 70s Sunday and 80s Monday.

Took Banished Jn to the theme park Sunday. Busch Gardens is just an hour up I-64 and unlike most its type its rather beautiful. Trees, hills, valleys, a lake... if it wasnt for the bloody rollercoasters it would be lovely.

But did see the first Tiger and Zebra swallowtails of the year amongst others. And amazed to see 3 large Anax dragonflies. Too quick to see the species but these are the same family as the Emperor or the Hawkers on your side of the pond. And there you'd never see one before mid June at the earliest. It is very early for here too mind you.

And I forgot, do you ever use this site?

Hi and sorry for the delay in responding. 70s and 80s eh! Lucky you! Still, in our gentler way here, it's been lovely, though now (Weds morning) the forecast for the whole country is 'dull and cool.' Oh well.

Have you ever been to Lightwater Valley theme park in the UK, Banished? It's very much roller-coaster land but incredibly well-hidden - in former gravel pits, I think. You can drive right past on the Harrogate-Ripon road without getting a glimpse.

Lovely-sounding sightings too - and yes, I have used the leps site. It's very good.

Hi JR and Sue and thanks - and good luck this season. Now I want to track down that Blue, though I can never get them to pose with their vivid topwings showing.

I never did get to Lightwater Valley, though I lived much of my life in Harrogate. My daughter wasn't a rollercoaster fan and I'm most assurely not.

But my wife and step daughters are big fans and they look to be planning on turning Jr.'s head too.

I love roller coasters and big wheels even more. I have never seen a moth on one however...