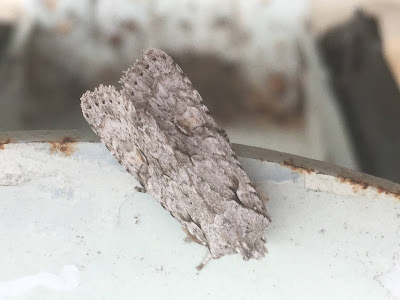 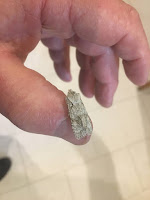 Sorry not to have posted for a while but things have been dull both in terms of the weather and the moths. I keep meaning to go over to a once-a-week regime but the prospect of something unexpected has kept me lighting the lamp more frequently than that. Nothing unexpected has however arrived.

Which is not to say that my visitors have been uninteresting. It was a pleasure, for example, to welcome what I think is a late newcomer for the year, the sleek grey Blair's Shoulder-knot, one of no fewer than three moths named after a single entomologist, Kenneth Blair (1882-1952) who was deputy keeper at the Natural History Museum and had the good fortune to live on the Isle of Wight. This is a famous landing ground for immigrant species and Blair was the first to discover, in succession, Blair's Mocha, Blair's Wainscot and Blair's Shoulder-knot.

My moth is the last of the three, I think, the only one to have become common. Indeed it has forayed as far north as Scotland where its arrival in Gordon Brown's constituency, during his time of intense rivalry with Tony Blair, caused mirth and a brief outing for the moth in the media. It has been a regular caller both here and in Leeds before we moved in 2013

I have written 'I think' twice, however, because I noticed earlier this morning that Dave Wilton, the great and helpful expert on the Upper Thames Moths blog, has recorded the rather similar but rarer Grey Shoulder-knot. So I must double check with UTM before coming down definitely on ID. Update: and the good news is, that this is a Grey Shoulder-knot, rather than a Blair's; so another species new for the year. I don't think I've recorded it since 2013. our first year down here; but that may be because I've previously made the mistake which I almost made this time. 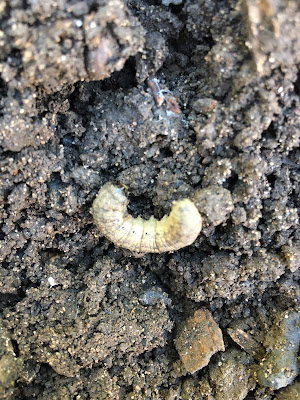 We have a very good potato crop this year and I have been digging them up regularly, disturbing in the process what I think are 'leatherjackets', the larvae of the Dady Long-legs crane flies which have been extremely numerous in the trap this month. They do fearful damage to immaculate lawns but we don't have one of those. My great hope, when spud-harvesting, is of course to find a pupating Death's Head Hawk moth. That has yet to happen here, but I will never forget the excitement of seeing the awesome moths hatched by a friend in Tackley whose young nephew made such a discovery. 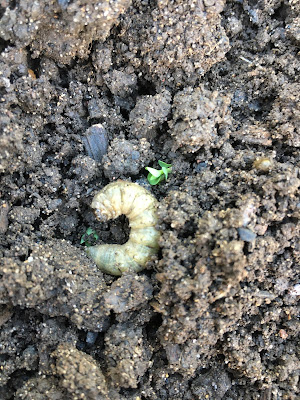 In terms of simple numbers, about 25 species continue to call on the trap and here are some of them - clockwise from the top left: Beaded Chestnut and Lunar Underwing (the two most common arrivals still; Green-brindled Crescent, such a fine moth; Rosy Rustic, Sallow and Silver Y, the last one of the few species which flies in the UK all the year round. 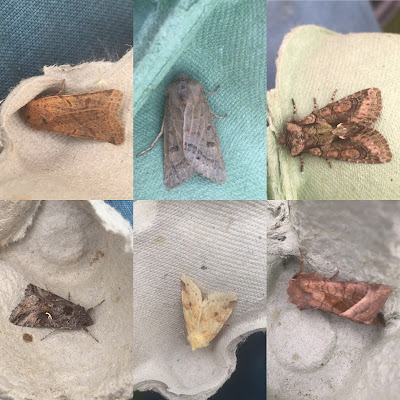 My next pictures show a couple of Large Yellow Underwings, extremely dozy latecomers of a tribe which was very numerous in August and September, and two Red-green carpets on the wall by the trap, one pronouncedly more russet than the other. 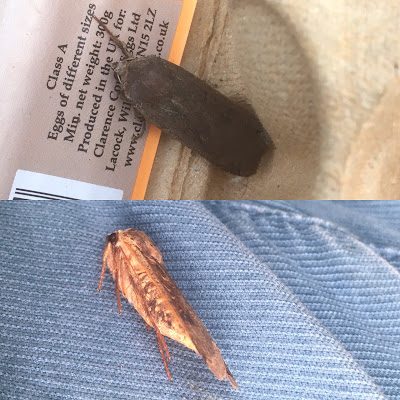 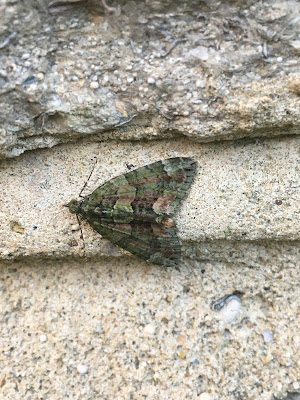 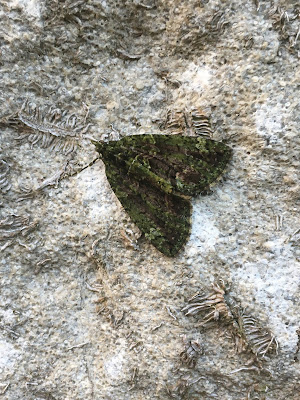 It was also interesting to find a Black Rustic with its wings partially spread, getting ready for take-off, instead of resting in the normal isosceles triangle pose which I find gives it such a resemblance to Darth Vader. The underwings, usually hidden discreetly, are a delightfully contrasting, almost shiny white. 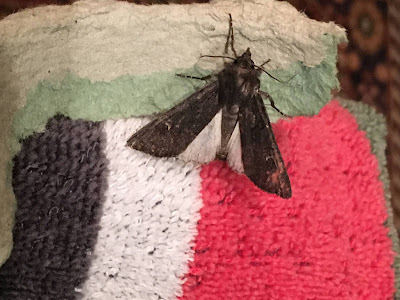 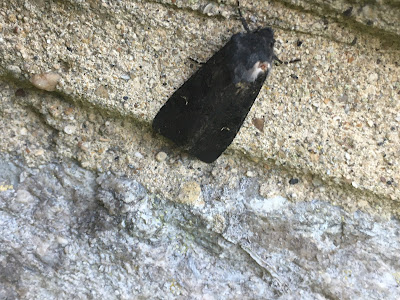 It still repays me to check the lawn within a couple of yards of the trap where recently I've found plenty of Sallows, as shown, and a smart Autumnal Rustic: 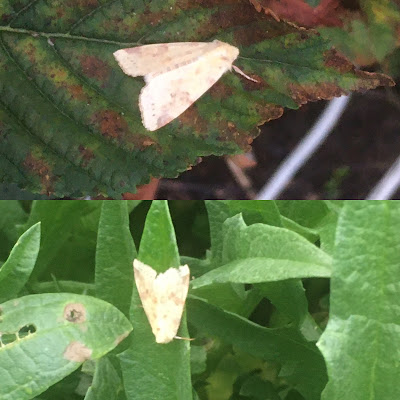 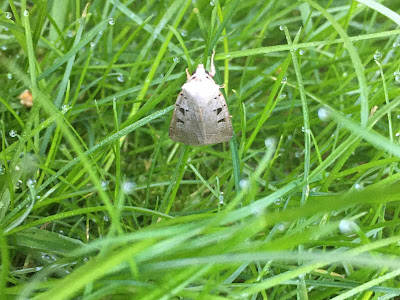 Almost finally, the Snout moth always tickles me with its Pinocchio-like appendage (actually its palps rather than a nose): 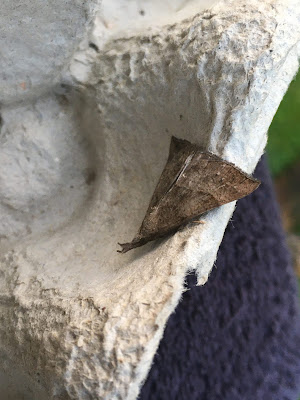 and to conclude, I must just mention an unusual way of finding a moth. Like me, you may occasionally get caught short in the garden and feel that the plants would not be harmed, indeed might benefit, from a little discreet watering. (Moths and butterflies too; recall the rather disgusting tastes of the Purple Emperors in Bernwood Forest where dog poo is not only tolerated but actually encouraged, to lure the great butterflies down from the tops of oaks).
Well, my activities unwittingly zeroed in on a Beaded Chestnut, which scuttled out of its hiding place just in time: 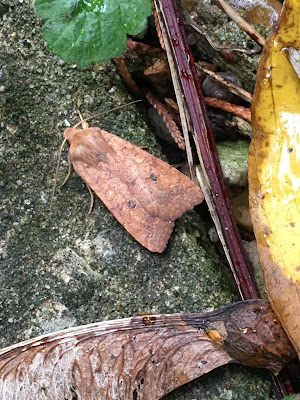 Update: many thanks as ever to Edward in Comments who corrects me - this is a Brick not a Beaded Chestnut. So far as distinguishing between moths like these goes, I can say with some confidence that I will never learn. Sorry!
Posted by Martin Wainwright at 08:04

The last moth picture is not a Beaded Chestnut, but a Brick.

Many thanks as ever, Edward. That's another first for the year, along with what does indeed turn out to be a Grey Shoulder-knot. Hope that you and yours keep well. All is fine donw here. All v best M

Good to hear all is well down in Oxon.
All well here thank you.