Hooray for the Marvel 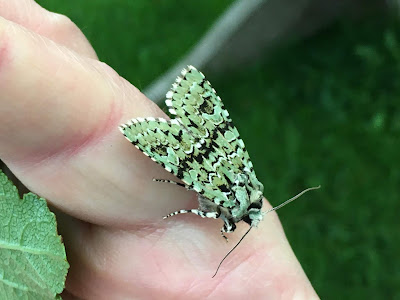 The succession of Autumn moths continues but was much more numerous last night, when the weather turned noticeably warmer. There was that annual highlight too, the beautiful and beautifully-named Merveille du Jour.

I have been expecting it but this morning initially resigned myself to a longer wait. The eggboxes had some very agreeable residents but not the glorious, complicated green pattern of the Marvel. But having got used to checking the trap's surroundings in my quest for a Clifden Nonpareils (so gloriously realised a couple of weeks ago), I had a quick look round after I had re-packed the trap to keep its residents safe from robins and blackbirds. 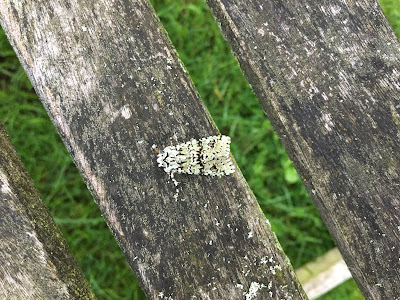 And there it was!  Snoozing on a garden chair which I had very nearly sat on myself to conduct my search through the eggboxes. Luckily, I had put the mercury vapour bulb and bulbholder there instead, fortuitously in a way which had neither damaged nor disturbed the moth.

It was hard to get its colour right in that position, such are the complications of our generally miraculous iPhone cameras; but they came out nicely when I tempted it on to my lovely finger. And then I decanted it into a bush and took this final photo of its delicate grey underside. 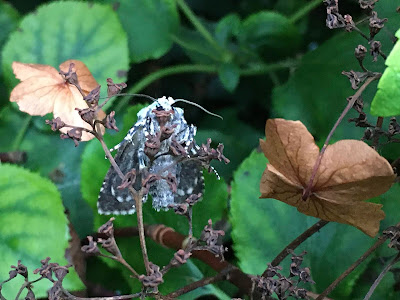 In the trap meanwhile, there were about 100 moths including, below, Top Row from left: Barred Sallow,  Dark Chestnut, Beaded Chestnut. Middle Row: Silver Y,  Red-green Carpet, Sallow. Bottom Row: Plume of some kind, Dark Marbled Carpet and another Sallow of the more simply-patterned type. 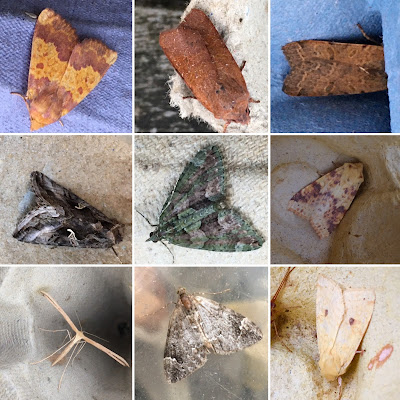 Finally, there was also this very worn Carpet, possibly a Spruce? 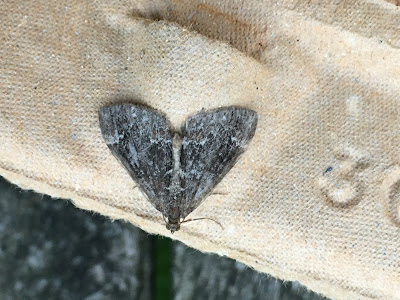 Posted by Martin Wainwright at 12:53